Located west of the Catawba River in the fertile North Carolina Piedmont, Gaston County brims with neighborly people and majestic vistas. With the advent of railroads in a Reconstructed South, the county united from High Shoals to Crowders Mountain and from Mount Holy to Bessemer City.

In 1926, Gaston residents witnessed the first four-lane highway through the state, presently referred to as Franklin Boulevard. In 1929, Gastonia was the scene of a violent textile strike. Although the strike was broken within two weeks, Gastonia and Gaston County represent the 20th Century and its brutalities between bosses' brutality and workers' struggles.

Piper Peters Aheron readily ties the history knots together and weaves a charming local history that parents, grand parents and children can share. It's a delightful addition to any family library. 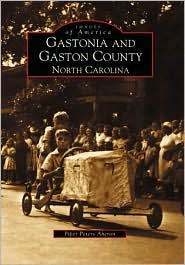 Order books at Arcadia Publishing or any local bookstore

For more information on Carolina history

Insights and suggestions can be found on LinkedIn